I have had a lovely couple of days off lately. On Wednesday I went to a shopping mall and bought some presents, on Thursday I went to Buxton and on Friday I joined a new gym, went swimming and had a haircut! 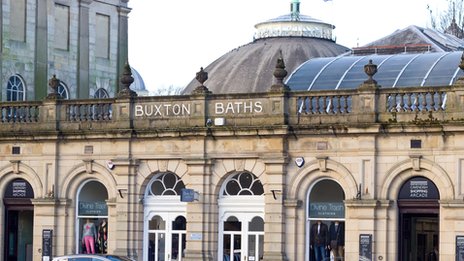 Buxton is a lovely place to visit in the Peak District. It is a village of around 20,000 with some nice cafes and quaint

old-fashioned shops, including a chemist that looks like it is still stuck in the Victorian era.

In 1572 Dr John Jones wrote the first medical book on Buxton waters entitled The Benefit of the Auncient Bathes of Buckstones. The spring waters were believed to have healing properties. Even Mary Queen of Scots visited to benefit from them. In the Victorian era it was a popular spa town and there is still a baths. You can drink the natural mineral water for free there and it is still bottled and sold today. 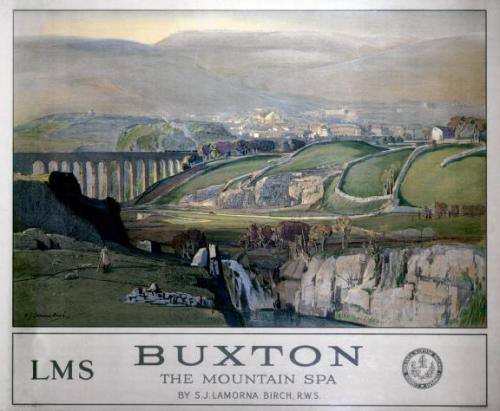 We went to a tea shop for a drink. It was a bit of a disappointment and tasted the same as when I make it at home. 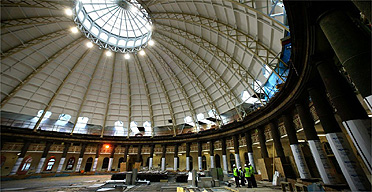 The “Devonshire Dome” there is a feat of civil engineering. It is hard to believe it was the roof of stables. It was built in 1789 by John Carr, commissioned by the duke for Buxton Crescent, converted into a hospital and is now restored by the University of Derby. Go in if you get a chance. I only got a chance to view it from the outside but the inside looks impressive just from looking at pictures. 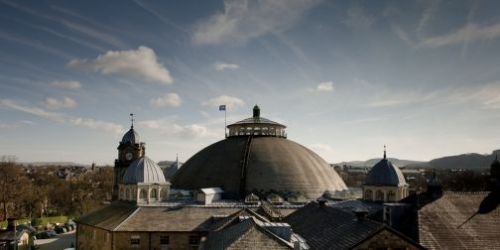 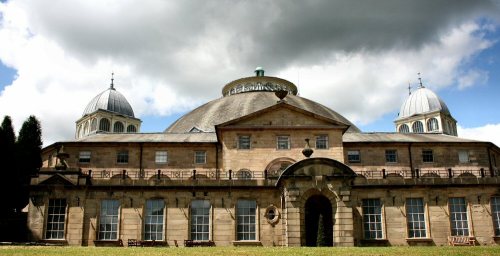 Mum’s main mission was the charity shops. Relentlessly we hit every single one. There were rail upon rail of cheap but tacky clothes, clothes only geriatrics wear and probably had. When I am that old I’ll wear charity shop clothes because I won’t need to look presentable anymore. I’ll be like the lady in the Purple poem.

But surprisingly we did find some that weren’t from M ‘n’ S, Tesco or Primark – Coast ones. I got a painted silk-style sleeveless ruffled top with a dark beige pencil skirt and a 1950s-style A-line dress. It’s blue with roses on and I can’t wait to wear it. Even mum laughed at the “vintage” charity shop. The clothes were like fancy dress for a 1970s party.

We went back to the tea shop for lunch. I was impressed with the selection – chicken curry, jackets with cream cheese and spring onion, steak sandwiches and “Buxton” burgers.

Mum said the burgers were good so I went for one of those. This was served with salad and posh crisps. Salt and vinegar, my favourite. I was enjoying it until I crunched on a couple of bones. I got one and thought that was it, continued eating and then got another…and another. Luckily I didn’t swallow them as I may have choked. I was slightly put off. The meat had been lovely, but I didn’t want to be reminded that I was eating an animal. The whole point of cooking meat is not just that it tastes better but also that you don’t feel like an animal eating another animal, like a lion at zoo feeding time.

I didn’t want to make a scene but Mum insisted we say something. They’d be nice about it, she said. So I told the manager.

“Ohhhhh.” She said, haughtily, the disdain all too audible, “we haven’t had that before. We’ve never had a customer complain about that.”  I thought I must be imagining her tone. I went to the toilet. It was cold like the cafe – at least the food was hot. There were flannels to dry your hands on that you put in a little basket, a nice touch.

On the way back, I saw her poking the burger meat around angrily with a knife, peering at it from the side. She then triumphantly reported to mum that it was “gristle” I had nearly taken a tooth out on, not bone. She said “I poked it with a knife and it wasn’t hard, so it must have been gristle”. How gristle was better than bone I don’t know. One woman walked out having hardly touched her “spicy potato soup” a thick orange lumpy broth. Mum was served hers with stale bread, the staff urging her to “help yourself to more if you want”. Clearly they needed to get rid of it.

Mum bought some cake and they charged her full price for that and the meal, despite my bones of contention. It had butter icing, not even cream cheese icing like mum does, which is much better and tastier. Cheaper ingredients and maximum profit. I stalked out indignantly. Mum was apologetic as I grumbled about the disgusting lack of customer service skills. I wouldn’t be going there again. Its name was “The Cafe at the Green Pavilion”.

Anyway then we went to the library and art gallery, which was a much more enjoyable experience. It was combined in an old building with wooden doors and stained glass windows. But it had also been converted into a museum about Buxton’s history. I expected it to be poor as it was only two floors and looked poorly funded. We went into the exhibition space of a dire modern artist, abstract shapes in different colours spoiling the walls.

In the corner was a dark corridor. I went down it and there were little labels indicating different periods of time hanging from the ceiling and a video showing the passing of time from prehistoric to modern times in photos and drawings. I turned a corner and walked into the Cretaceous Period.

A massive dragonfly clung to a tree and there were noises of the forest around me. I walked on and into a cave.

There were bones of mammoths, bears, hyenas and in the corner roaring at me, a bear that looked rather too life-like. I quickly walked on into the “hunter-gatherer” age and a skeleton lay in a glass case, a man of 25-30.There was a little burial tomb reconstruction that you could crawl into. There were knife and axe heads on display. I went under an arch into the Roman period.

This interactive journey through time just kept on going, a maze of corridors and passages making you feel like you were actually in that era. It was fantastic. 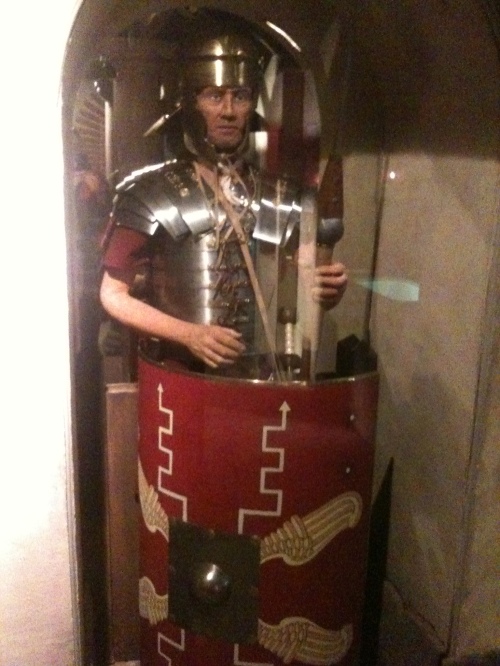 There were Roman columns all around me and a life-like centurion in full armour standing by the wall.

A ceremonial washing basin was on the right with a bronze head above it. Further on was a Roman rubbish dump – much nicer than modern ones – all broken jars and animal bones. I wonder what future ancestors will make of ours.

There were videos playing and you could hear the audio so you could take it in as you looked at the exhibits without having to watch them. I heard that to become a Roman citizen you had to serve 25 years with their army. Many Anglo-Saxons did and were posted away from their families in the Empire. Some would never have seen their families again. 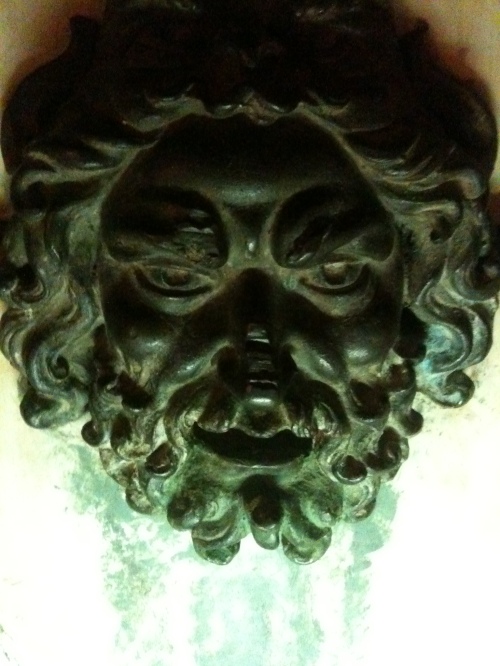 Due to space there was only a corridor linking this age to the 1700s, telling of medieval hunts in the forests. Then I went into a 1700s sitting room. 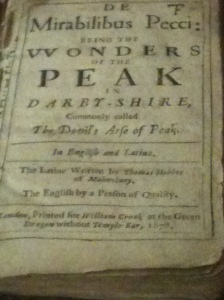 You could sit on an imitation chair by the fire surrounded by fancy things. In the next room was a reconstructed “Buxton” black marble workshop.

The public went mad for this rare marble in the Victorian era and would buy loads of the stuff while on their spa breaks. It was made into everything – tables, chairs, jugs. But production virtually stopped when the craze was over. You can still buy it though.

There was a corridor dedicated to more recent years and all too soon I was back from my time-travel journey. I enjoyed it so much I went back in time instead of forwards. I couldn’t believe the collection box was empty. Museums are poorly funded these days so if they do a good job they need financial backing. I gave them a little. The time travel machine was too good to be free.

We then went round the flowers in a conservatory, enjoying the sweet scent that filled the air. We passed by the Pavilion Gardens on the way out but sadly it was too cold to enjoy them.

On the way home we saw what looked like World War Two bunkers but they were in fact enclosed kilns (enclosed to conform to blackout regulations) for the production of quicklime from Derbyshire limestone, which was produced in Buxton from the late 1800s until 1944.

If you’re visiting Yorkshire or England for that matter, don’t miss Buxton and its museum. It’s great for adults as well as children.

Filed under Days out/nights out, Life of Lydia