Panglao was the best island I visited in the Philippines.

Fewer tourists and the local lifestyle did not appear to have changed as a result of them. A lot of rainforest was intact, though it was rapidly being sold off and cut down and stone houses were springing up. There were still some traditional ones made of bamboo, flax and rattan.

The hotel I stayed in there was the best – Mithi Resort and Spa, a peaceful secluded spot right next to the sea, with a small private beach, incredible snorkelling and luxury accommodation. It was so popular that the standard room had sold out when I paid for it, but the upgrade was worth it. Although I had not paid for a sea view I could see it from my balcony. The staff were so attentive and friendly.

I got there from Cebu by taking an Ocean Jet ferry to Tagbilaran and then the hotel picked me up and drove me over the bridge. It took a few hours.

I made the most of my time there. I found a great private driver hire company, Valleroso and Ralle. You gave them your itinerary and the driver would take you wherever you wanted for a reasonable price, just £30 a day. I asked different companies on Facebook (their companies are all run from social media) until I got the best price, as I was on a budget and kept going over it.

At 10am (I am not a fan of early starts) I went first to the Hinagdanan cave. It was not worth the visit, being small and already busy with tourists.You literally just stand on a ledge once you descended, there is nowhere to go.

The water looked a bit dirty too, I could see grease on it. The tide was out, so we could not enjoy the water. I saw a much better cave in Bohol where you can swim. I will write a post on that soon.

We went to the Blood Compact monument near the port. This commemorated the moment when the local tribe signed a peace deal with the Spanish, drinking drops of each other’s blood in wine in the traditional Cebuano style.

Next up was the pentagonal Spanish watch tower, built so the new settlers could be alert to local attack on all sides, and a church with a pretty painted ceiling.

I was able to get cash out at an ATM without being charged. They had a guard for safety, although the driver told me that they rarely had crime. Everyone knew each other.

I had read about a restaurant with panoramic views on social media, appropriately called Le Panorama, over on Bohol. I went there for lunch and had the best fresh prawns I had ever tasted, in a very tasty tomato sauce, with rice. It was midday but being on holiday, I had to wash it down with a pina colada!

After lunch I had asked the company where a good beach was that locals used, I avoided Alona beach as I had heard that it was packed with tourists and had litter. I won’t name the beach as it is secret, so it doesn’t deteriorate too.

There were palm trees all the way along the shore, only two other tourists and lots of locals fishing in one corner, swimming and snorkelling. One of them came up to me and said I should stay at his brother’s apartments and like everyone around there, said I should live on the island.

On the way back I wanted to try some traditional food so I stopped at a street stall selling fried chicken. I hadn’t seen any cafes or restaurants. The islanders seemed to eat at home. I asked for two pieces. The man went to the back of the stall and started hacking up chicken. People around gawped, even looking back from their scooters. I asked my guide what was happening and he said “you wanted two chickens didn’t you?”.

After the United Kingdom, the United States and Canada my blog is most viewed in the Philippines.

I have donated to the Typhoon Haiyan fund before but recently I was able to contribute a little more. Thousands died and a staggering 11 million people were affected. The videos and photographs of the devastation were horrific.

Charities have helped 1.6 million so far but there is still a long road to recovery ahead. Of course the disaster also impacted on infrastructure – depriving millions of basic needs such as food and shelter. Some cities are still reliant on electricity from generators and many survivors are entirely dependent on aid.

Today I finally got round to it and gave £25. After Christmas and the holiday and with only a temporary job, I couldn’t afford to donate much but something is better than nothing. Just £25 can give water purification tablets to ten families for a month. I did this through The Disasters Emergency Committee website, a hub uniting all the major charities. The country remains crippled by foreign debt, with £8.8 billion to repay in 2014. So charities have a crucial role to play in helping the country back to its feet. Just a quarter of the $791 million (over £483 million) appealed for by the Office for the Coordination of Humanitarian Affairs to cover needs over 12 months has been donated. 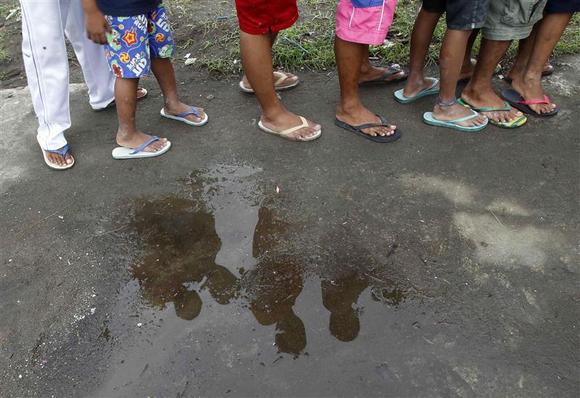 So when you’re sitting cosily by the (fake/real) fire with your (fake/real) tree, or having that turkey curry buffet, or just enjoying the holiday, spare a thought for the millions reliant on charity to supply food, clean water and shelter. Help continues to be needed even though the bright lights of the media have since moved on.