Last night after my friend’s home-made pizza we went to see Interstellar. I wanted to see what all the fuss was about.

The IMAX experience was worth it but take ear plugs – the rocket sound was so loud you could feel it! It was as if you were in the spaceship with them.

The visual effects were amazing but sadly it was ruined by a soppy story about the father-daughter bond. It was a good idea but it was given too much attention and became quite nauseous, frustrating to watch and laughable. They could have edited quite a bit and spent time developing the plot instead. Scenes were either rushed or long without much happening, Family relationships were played out repeatedly, it was trying too hard.

Much has been made of the logical inaccuracies of the plot which I think is unfair – it is a work of art not a documentary. No-one seems to complain about this in action movies such as James Bond, where he has a heart attack and keeps going.

Many of the characters, aside from the main ones. had very little script and were therefore mere sketches. 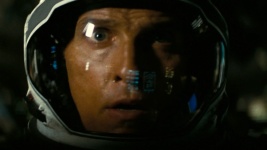 The music by industry legend Hans Zimmer contributed to the film’s atmosphere well and the acting was first class, especially by Matthew McConaughey, who appeared to have got into character by losing weight.

It is somewhat similar to Gravity except it has less action and is more focused around its main characters. It would have benefited from being 3D but was impressive in provoking questions about the big picture – our place in the universe and how important our relationship to our family and environment is.

I could see why people liked it – it was a tear-jerker with plenty of scenes of love and loss. But it was only the depiction of space that I enjoyed.

It’s great timing seeing as we’ve just landed a probe on a comet. What an incredible feat of maths, science and engineering. Just 50 years or so ago it was inconceivable that we would even land on the moon.

Filed under Days out/nights out